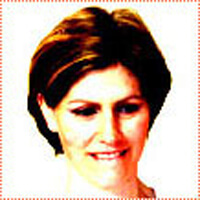 "My inspiration: the endless hopscotch of terrestrial places. My aspiration: an immense chessboard of imaginary locations."

Born in Bâle (Switzerland), Alma, A.K.A. Sylvie Schmitt, graduated as a landscape-architect at the “Ecole Nationale du Paysage de Versailles” and has a degree in plastic arts option applied arts/industrial aesthetics at Paris-1 Sorbonne university. She worked briefly as a landscape-architect in a Parisian agency before she shifted towards visual communication. As she was attracted by computer graphics, and by the many possibilities offered by computers, she worked in various advertisement agencies where she designed logos and packaging. The emergence of the internet allowed her to approach web-designing and graphical interface design. Alma thus worked as “screendesigner” in Switzerland. Since 2000, she works as a multimedia graphic designer and as an independent plastic artist, sharing her time between different missions and painting. In 2004 she exhibited her work at the Galerie L’Alchimiste in L’Isle sur Sorgue, and at the Art’et Miss Galery in Paris.

The square is at the centre of Alma’s paintings, a square given as a universal modular shape, allowing playing with endless visual combinations. Because beyond the shape of the square, it is indeed the construction of spaces that is at stake. The artist, through a planned and rigorous work, creates paintings that are “(…) the evocations of real or imaginary/virtual landscapes seen for the sky.” where colour and substance play an essential role. Indeed, through a game of transparency and thickness, of saturation and desaturation, of nuances, of reveals through scrapping and concealment, colour awakens shapes, conferring them spatiality and structure. Alma’s paintings are made of superimpositions of glacis, graphical and coloured highlights, mixes between painting and collage, lines of pastel and crayons, creating for the viewer the illusion of a succession of dimensions, of depth, of interlacing shapes, traces and signs. The spaces that unveil before our eyes are possible maps of imaginary lands, compositions where tension and balance between squares offer new visual perspectives: “(…) I operate an “aesthetical” reversal of filters, layers, signs, codes, grids or screens, all tools that allow us to grasp the notion of space. “To integrate geographical clues to create new dimensions and compositions (…)”. Alma’s work is a possible synthesis between architecture and painting: space to wander in, virtually.