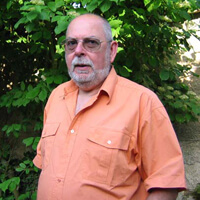 This French artist, from Poland a and the region of Bourgogne (France), was trained at the Jullian’s Academy in Paris. He settled his studio near Fontainebleau where for four years he has held his studio, rightly named “Fresh Painting”. He also hosted drawing and painting workshops in an association and in schools. His works are present in many singular collections in France, Italy, and Eastern Europe.

Outside, his face itches because of the frozen air. His collar up, he steps  through the desert alleys of this forgotten village. Suddenly, going past a house, he hears sounds. He draws nearer… music? He pushes the door. A quartet is isolated in the middle of the room, bathed by a golden light. The musicians don’t see him coming in. Focused on their instruments, they split the space in lines and plans. The shapes seem to lose their limits. Vertical strips vibrate out of a chain of jerks. From a distant point of view, he warms up at the heart of the group. The composition crosses at a leakage path  -  a focal point directing looks on a precise detail: the violinist’s hand, the strings of the bass, the peeled potatoe… The cross geometrizes the extent of each canvas. From this calculation, the image builds in  offset framings. Around them, the tones degrade into used colors. Kalus whispers to paint so as to “bring out feelings and a legacy from the past”. He remembers Bazaine, Paul Cézanne, Nicolas de Staël, Viera Da Silva…  until he is rushed. In the back of the room, a light ray comes out of a door left ajar. He heads for it. There he is, immersed by the shine of a strange sunset, fragmented by his artistic eye’s kaleidoscope.