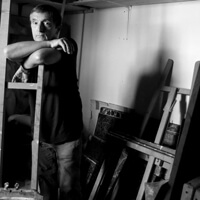 "The painting is a world by itself. It creates its own beauty and ugliness. Then, it kind of creates a superficial reality."

Jean-Paul Duvillers was born in 1946. He is from the North of France. In the mid 60’s, he began to travel in Europe, by hitchhiking. He spent a lot of time in England, Germany and Italy .After a military service in the marine, he went to Pakistan and India for a demobilization during two years. He was influenced by the colors in these countries. When he came back to France, he really focused on painting, daily, and met with other painters. He acquitted a good technique and participated to numerous exhibitions. In Lille, he had a good place to exhibit in order to get famous. In 1994, he took his family with him to live in the Périgord for a few years. It is a rural region which has a big prehistoric past. Very impressed by the concept of this region, he then got interested in primitive arts. At this time, he travelled to Asia and South America to know better the antiques civilizations and their monuments. In 1997, he settles down in Paris, where he lives and works nowadays.

“About my painting: I really liked the flemish fantastic, made of reality, with a perfect technique. I underwent this influence and it became part of me. I have always draw, everywhere and on all possible supports, with the idea to reproduce these drawings on canvas. I have never done it, because to copy, even my own drawings, seems impossible to me. Also, I always work with a different way. However, some constants appear in my work, as the human presence, the contrast of colors, etc… The possible variety of sizes interests me as well, because the size of the painting implies a specific construction and then a supplementary element of the adventure. I like the “cooking” side of the act of painting. Indeed, in the oil painting, there is the oil of the paste which has its importance.