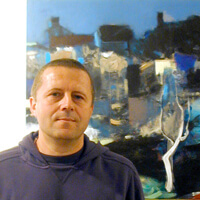 Of Bulgarian origin, Iavn Tzonev learnt drawing at Veliko Tarnovo’s Fine Arts School, before teaching it himself. Ivan, who belongs to the New Realism movement,  became a recognized painter in his country where he does many exhibitions (Sofia, Galro, Varna). He admires painters such as Braque, Soutine, Vandangen, which he feels very close to: their figurative works are for him a reference in terms of composition, shapes, colors. He now has settled in France for more than 10 years.

All of Ivan Tzonev’s plastic work offers us to see human beings, their force and their weakness: men and women, bodies and above all faces, which he creates by mixing techniques (acrylic, oils, dry pastels, watercolors, gouache, pencils). This main topic lies in the middle of all his research. Witness the titles of the exhibitions he could realize, either collectively (in the frame of fairs organized by the Communist government then ruling in Bulgaria) either individually: “sitting men”, “sitting women”, “the ground and the population”, “the work and the people”, “the land of heroes”, “the sea and the people”. When he paints, Ivan thinks about the Slavic people by drawing, coloring or painting the faces of these people who work harshly in the Bulgarian country. He shows us the tough looks and hard faces of these people that life does not spare. Their destinies demand sacrifices and their faces keep the marks. Ivan Tzonev is the painter of faces that reveal wounds; but he also is the one that goes beyond the toughness of their daily life, and that discloses the existence of a softness coming from inner magic.