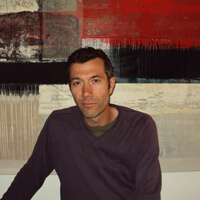 "It’s from a chaos that the canvas is organized: paintbrush strokes, abundant run, and after a while, the storm subsides and all of elements make a quiet image."

Self-taught painter, Bertrand Riguidel has always painted and exhibited in different cities and galleries, especially in Brittany where he comes from. When he was 20 years-old, he went to Paris to study in Sorbonne Nouvelle; he is graduated in Bachelor of Drama. He worked in Theater La Bruyere like communication assistant and met Franck Peyrinaud. Together, they set up an  attaché press office of performing arts – adventure lasted 10 years: they worked with famous theaters of Paris and famous people like Niels Arestrup, Jacques Weber, Georges Wilson, Judith Magre, Laurent Baffie, Bernard Tapie, Nicolas Canteloup… Today, Bertrand Riguidel entirely devotes himself at painting.

OCEAN(S) is his second series. It is the prolongation of his previously work, L’EMPRISE, in the way that the same “ingredients” are used to compose the canvas: canvas pieces or painted fabric, silkscreen printing thread, paper mounted on canvas… but this time, it’s from a chaos that the canvas is organized: paintbrush strokes, abundant run, and after a while, the storm subsides and all of elements make a quiet image.. The innovation is also in the fact to melt the oil painting with acrylic – this technique allows him to get transparence. Bertrand Riguidel works monotype: he paints on paper that he covers with a blank paper – he keeps the best print, the one which the most inspire him. The topic is the accident, adventure… He spreads this paper on canvas what give a thickness which contributes at material on painting. Fabric pieces are chose, adapted and compose canvas; they bring a met surface area and a color flat tint… OCEAN(S) series is, for him, the opportunity to work on abstract landscapes, almost “inspired by traditional Japanese”… always between figuration and abstraction. Bertrand Riguidel like creating painting in painting: each canvas is an especially framing in which is organized small landscapes, like is spectator zooms in parts of painting.