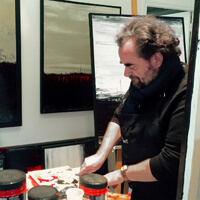 Nel has been devoting himself to abstract and instinctive painting, as well as rock sculpture and forged metal. From a scientific background, he began his training in an industrial environment mixing design and car research. In 2005, he left industry to devote himself entirely to his artistic activity. For two years he took an art-therapy course taught by Catherine Mazarguil at Coussegrey’s L’atelier du Laurier Rouge (89), while learning rock sculpture with J.P Julien. From 2006 to 2011, he hosted his own art-therapy workshop at Brunehaut’s ITEP in Morigny Champigny (91), an institute for children with great insertion difficulties. In 2008, he created “L’atelier des tartines” in Orléans, a place of expression and exhibition, where he hosted a workshop for children and adults, focused on the artistic path  about materials and colours privileging each person’s freedom  of expression. In 2010, he created “Filambul”, an artistic performance with Delphine Bordat (a musician) and Adrienne Bonnet (a reader), in the form of a reading accompanied by music a plastic artist’s performance. 2013 marked the realization of an artist’s book with 10th grade Art History students at Alain Fournier high school  in Bourges (18). Nel also uses photography as a way to recapture the immateriality of reality, as witnessed by his latest works, “le petit chaperon rouge” (photos and paintings) and “La femme et le chiffre 7” (realization of a book mixing writing in the form of haikus, sketches and photographic portraits). Nel wants to be instinctive. He paints as soon as an idea germinates, without thinking entirely to the canvas. The final result rarely looks like the work thought initially. The canvasses are painted quickly, so as the artwork expresses a precise thought. The brushstroke and the colour are related to emotion and nothing else. The paintings of maturity underline the tragic of ecstasy as a fundamental condition for existence. The point is to express the very essence of human drama. A moment, a canvas, constantly preoccupied by the art of painting. The expression in place of a process.

Behind Nel’s work hides an anarchical side. The spontaneity that defines him induces a deviation from  a classical time of creation. No sketches, no long thoughts on a canvas, unlike most of his peers.  His painting method is original and can be considered as unorthodox : Nel mixes materials, oil, acrylic. He works the thickness of it, his canvasses do not experience the brushstroke. The knife takes its place, stating the artist’s wounds. With this tool, he can work by touch, modify his artwork as he pleases, rework it, add matter. The colors are dark but are well-balanced. The red comes fighting the obscurity of the omnipresent black. If it can be noted that explosions of colours exist in some of his paintings, they still remain dark. It can also be noted different ranges of colours on his artworks that are worked all through the canvas. Nel starts from a range and works it until exhaustion. Finally, the symmetry: his canvasses are often parted by a vertical or horizontal line giving an artwork that does not end, that is limitless. So it is a work of imagination that is practiced. Some could see a link to the land, by this line coming out of the ground, or even a duality between the upper world and the lower world, as others could see a separation, a fracture, that would look like Nel’s rebellious personality.