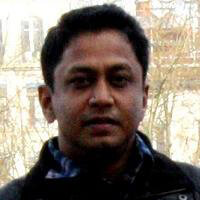 Ray is one of India's best-known contemporary artists: he has acquired great importance through the initiation of a new artistic genre called Pseudo-Realism. Also, started only about ten years ago, Pseudo-realism is today the most popular Indian artistic genre. It has not only attracted the attention of the media, but it has also sparked academic discussions that in recent years have led to the publication of three books on this topic. Over the last decade, Ray has worked overseas and has exhibited in Asian cities such as Singapore, Dubai, Ras Al Khaimah, Kuala Lumpur and also Mumbai and New Delhi. This year Ray will present its first European exhibition in London, which will be followed by one second for the next year. According to the Theory of Mathematical Representation, Pseudo-real impressions are global representations, equivalent to its conjugated complexes, but at the same time they are not real reproductions. In coherence with the template promoted by pseudo-realism, eccentric colors and forms are juxtaposed to give an image that, in its entirety, is close to reality. Ray's goal is not to faithfully reproduce reality. When he uses bright colors to deliberately emphasize their contrast, the image he reaches at the end of his work is neither overwhelming nor incomprehensible. As an ideology, pseudo-realism has recently generated intrigues that have led art students to conduct academic research around this subject. In addition, three books have introduced his style to the center of Indian discourse on contemporary art. At a recent exhibition in London, pseudo-realism was compared with the movement of optical art, born and developed in Europe in the 1960s.